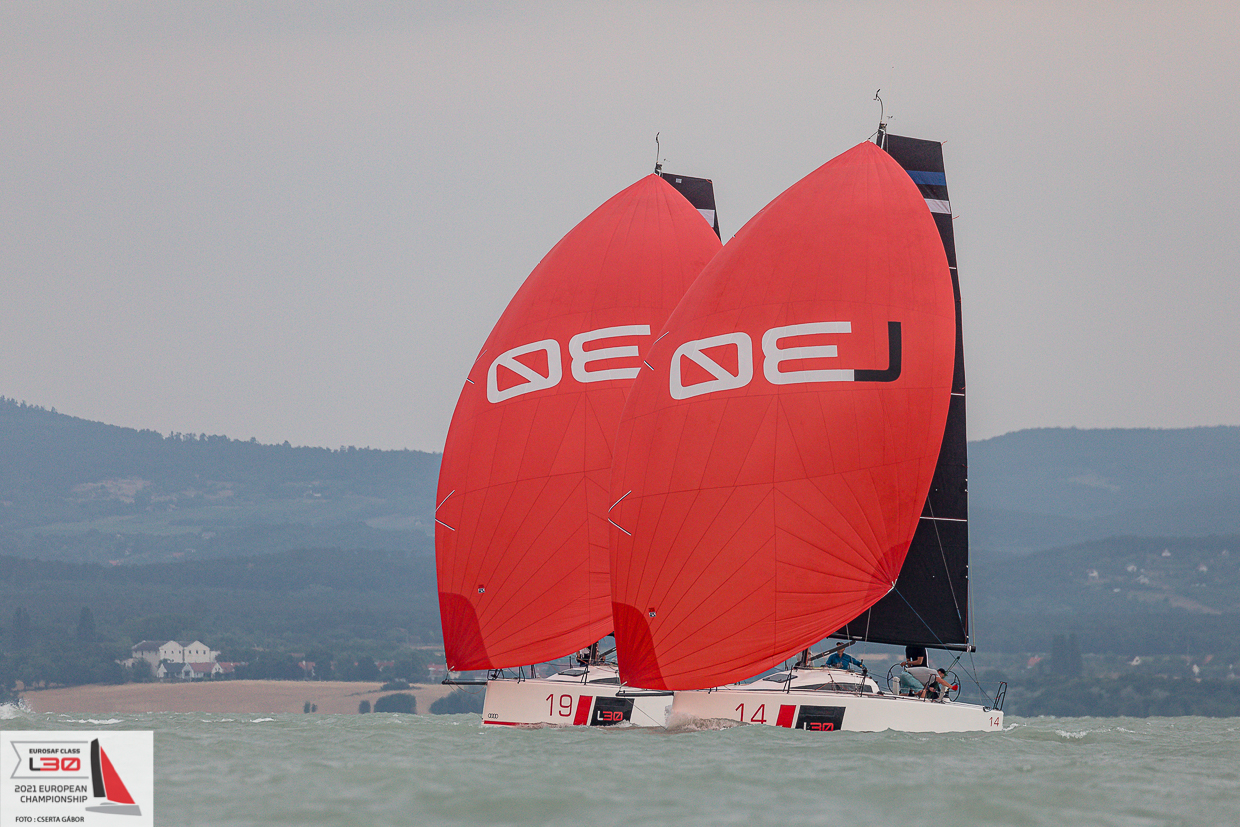 At July 19th the racing at the EUROSAF L30 European Championship resumed at Lake Balaton with four races sailed. The local teams continue to dominate, but the competition intensified.

After some baking hot weather on the opening day, the second day of racing blessed the 14-strong fleet of the L30 Europeans with fantastic conditions. Four races were sailed without any delays in perfect 12 to 16 knots of oscillating wind and mild air. The day was full of action that (together with discard applied) brought about some changes to the overall leaderboard.

Generally, the local teams continue to dominate. However, the second day showed the new leader. Yesterday’s runner-up crew of Bakonyi Attila HUN307 Tranquilo posted astonishing three bullets in four races. No wonder, that yesterday’s leader Peter Tenke’s HUN308 “Present Perfect” has settled with the second result overall. In fact, for both local teams, the game is still wide open as the points’ difference is minimal.

Due to very consistent performance, the German entry GER31 of Klaus Wagner managed to hold the third position overall. The German crew continued their confident performance disregarding the weather change. On the second day, Wagner finished no worse than the fifth.

The Polish team of Wtild Jankovski managed to find their grove after disappointing double DNF on the first day. The Polish entry showed serious ambitions when they scored fifth and second in the opening races while actually leading the fleet at the first mark in the second race. Later in the day, when the wind eased, the crew A’Polonia lost their focus and the last race went completely wrong. Anyway, the crew looks confident before the last day of racing as they climbed from 12th to 8th with less than 10 points deficit from the top-5.

The Hungarian entry Piros HUN304 made even greater progress. From 9th yesterday they jumped at fifth. Despite the crew of Mészáros Mátyás wasn’t very consistent – they were either leading or in tenth positions – they may be satisfied with their performance having also discarded the sad DNF from the first day.

The Irish 49er Olympian Fraser Brown had a very good perspective of the results’ improvement. His mixed crew sailed smartly improving with each new race. Sadly, at the second start the team scored UFD penalty. Therefore, after lots of fights, the Irish entry could not help but remain in the seventh position.

“This was a fantastic day, the conditions were perfect and we enjoyed it a lot, – Fraser comments. – Concerning the results, I can say that we regained our confidence and we will fight tomorrow”.

The 20th July will be the final day of racing at the EUROSAF L30 European Championship. As the forecast looks promising, three races are planned and it is difficult to predict if the local teams will manage to defend their lead.